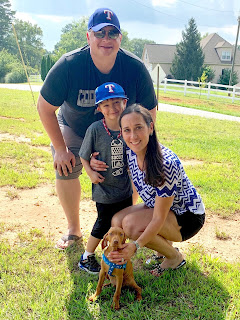 Our Vizsla, General, has been cancer free now for the last 3 months!! We are believing he has been healed and beaten cancer unless he shows signs to us otherwise. We are walking in Faith and continuing to trust our Good, Good, Father and Lord in Heaven. Every day I keep filling up his dog bowl and every day he keeps eating... 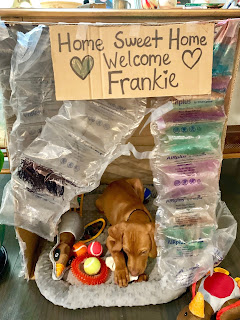 Our other really exciting news: We welcomed a new Vizsla puppy to our family! His name is Frankie. He was 12 weeks old when we got him last Saturday. Frankie was the last puppy to be sold out of a litter of 8 puppies. He seems a little small, so I think he may have been the runt of the littler. He is very docile, friendly, and sweet. He is not timid but certainly not an alpha dog. And his eyes... Frankie has the most enchanting green/grey eyes. Green eyes are very rare with Vizslas, maybe only one, if that, in a litter. 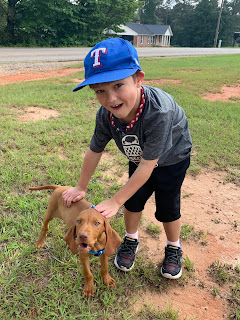 It was completely love at first sight when we pulled up and first laid eyes on Frankie!! He was outside with the previous owner waiting on us as we arrived. After the 2 hour drive to the countryside, North East of Atlanta, we were eager to jump out and meet our “Little Man”, as they had nicknamed him. It was all smiles, laughs, and snuggles as we scooped him up and each took turns with little Frankie in our arms. We rode home together with me in the back seat with James, and Frankie in my lap. James has never had his own puppy before so he is so excited! James is already doing a great job helping out and playing with him!! He even made a card board box “crate” for Frankie that we decorated. 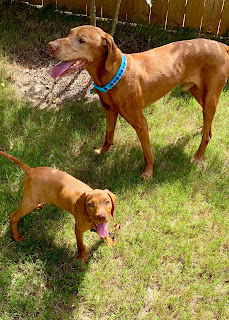 General and Frankie have totally hit it off! General already loves his new little brother from another mother. General is like a cool big brother to Frankie too. Frankie follows James and General around everywhere. General is so sweet to Frankie. They are quick friends and play so well together. Even when General wants Frankie’s raw hide. Luckily, we have multiple raw hides and Frankie doesn’t mind getting a different raw hide after General takes his. I think it is a sign of R.E.S.P.E.C.T. to General. 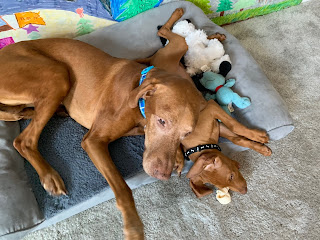 We started talking about getting a puppy last Fall when we tried to breed General with a female Vizsla. We thought we could keep one of the puppies from the litter, as the stud fee. We were so excited that, “General was going to be a Daddy!” General would even wag his tail when we told him that. We fenced in our back yard and first started dreaming about our puppy. 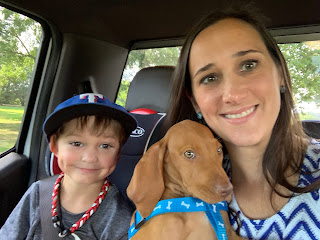 God had different plans, as you know... General was diagnosed with cancer and then the female had a false pregnancy. That means her body thought and acted like she was pregnant, but in fact there was not a litter. Which, both together, was heartbreaking. We were saddened and yet, still trusted in God’s Faithfulness!

But we didn’t stop dreaming about getting a Vizsla puppy...

and Saturday we made another dream come true by getting a sweet little Vizsla puppy, named Frankie!! 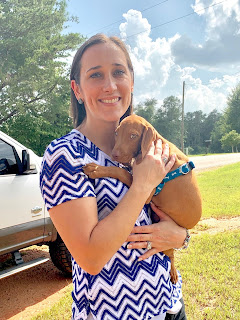 **In my humble opinion, Vizslas are an awesome breed of dogs.There are not a lot of things cuter than a Vizsla puppy. I have a soft spot for Vizslas, though. Frankie marks the fourth Vizsla I have helped raise. Nicknamed the “Velcro Vizsla”, they are loyal and always want to be right by your side. Their fur is very short and soft. They do not shed a lot, and are considered hypo-allergenic dogs. They are very eager to please and quick to train. They don’t typically bark a lot, but they do want a lot of attention and interaction with people. They are great with kids. They are Hungarian bird dogs and can be trained for hunting, as well. They have a ton of energy and need a LOT of exercise!
Posted by Jen B B at 9:59 PM 2 comments: