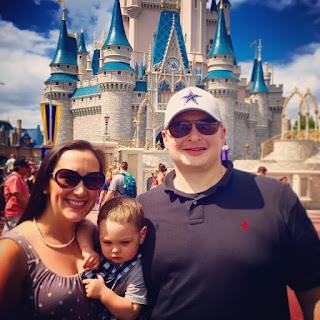 Disney World. It certainly is the happiest place on Earth!!! It's Magical.  It's Adventurous. It's Cultural. It's Futuristic. Going to Disney World was one of my favorite trips. Going to Cocoa Beach was also a great highlight. As I mentioned in my previous blog post before, Kyle, James Kyle, my dad, my brother and his family all went with me.

We stayed at Summer Bay Resort. Kyle, James Kyle and I had a two bedroom condo and my dad and brother's family shared a three bedroom house. Summer Bay had three pools with poolside bars, tennis courts, activity centers, and it was also set on a couple lakes. Disney World was only about 15-20 minutes away, which was really convenient too.

Monday we all went to Magic Kingdom. Since it was Kyle's first time too we wanted to do the adult rides. My dad and brother took turns watching James so we could ride the rides without James. James did the Tea Cups. He was happy watching all the people, the characters and the parade. I look forward to returning when James is big enough to do more rides. He is so little. When he is bigger he will also remember more.

We spent Tuesday at the resort, resting and spending a lot of time at the pool. James was such a natural in the water and loved playing in the pool with us. That was his first time in the water, except for baths of course! Then we went to the T-Rex restaurant in Downtown Disney for dinner.  Every 15 minutes the lights went low and all the dinosaurs lit up and moved around.  Then there were a lot of birthdays and the staff clapped and sang. That was the first time James started clapping too. It was really cute! 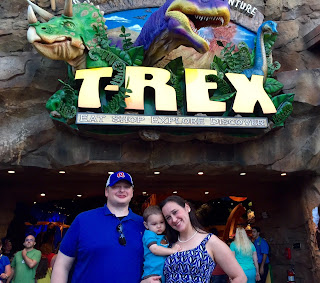 Wednesday we went to Animal Kingdom, where James was more able to do more things than at Disney World. We did Expedition Everest right before they closed. We saw the Finding Nemo show, It's a Bug's Life, and we rode the Safari and lots of other attractions! I think James liked the Safari the best. He kept pointing to all the different animals and was waving at them too! Animal Kingdom was Kyle's favorite. 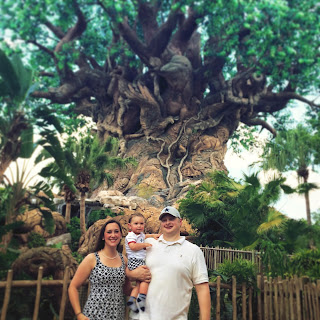 Thursday we went to Cocoa Beach, which was only about an hour away. The first stop was to the famous Ron Jon's Surf shop. Then we went to a hole in the wall restaurant on the beach that was yummy. Then it was off to the beach. Kyle took James' left hand and I took his right and he walked out into the water while he was wearing his little blue crocks. As he was getting splashed by the waves he laughed and made the sweetest noises. It was the type of moment Kyle and I will both never forget. Then we built a big sandcastle and James loved playing in the sand. It was special for me to build the same sandcastle we built to announce I was pregnant almost two years ago. 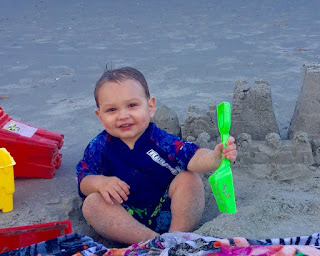 Friday we went to Epcot. We did everything with James. He liked riding in the boat on Living on the Land, the Lion King show and many others. We met Mickey, Goofy, and Minnie. Minnie ignored me and wouldn't give me a hug. I was hurt but it's ok. :) Then we had an awesome early dinner at the Biergarten. It was in the German area of the World Showcase. They had all the famous German entertainment, including alphorns, Alpine bells, singing, and dancing. 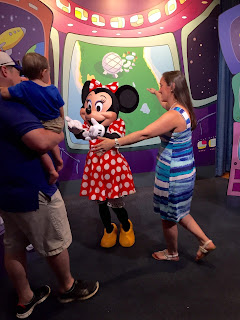 Then Saturday we ate lunch with our friend Sean at Bubbalous Bodacious BBQ. It was delicious! Best sweet tea in Florida. Then we hung out with my dad at the pool. My brother and his family left and we stayed until Sunday. My dad stayed the extra night with us. James did so well the whole trip, especially at Disney World. He didn't even have one melt down or temper
tantrum. He is our little angel baby. Over all it was an awesome trip and I can't wait to go back!!!
Posted by Jen B B at 9:43 PM No comments: